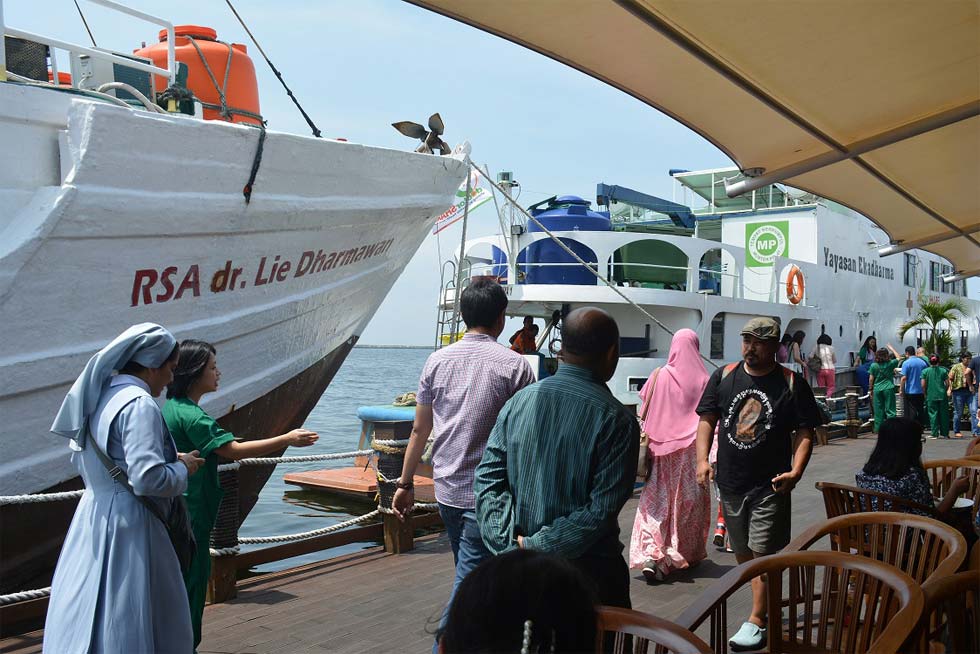 Lately, the news in various mass media has been filled with SARA issues. For example, the alleged blasphemy by the incumbent, the alienation of the Rohingya ethnic community, and so on that do not need to be discussed at length in this paper. Indonesian President Joko Widodo had expressed his views on this universally in a talk show program on a private television. “Diversity is a gift, a strength and potential,” he said loudly.

Bhinneka Tunggal Ika, different but still one, is a state motto that becomes the spirit in all aspects of national life. This spirit has also grown during doctorSHARE’s seven-year journey of sharing and serving in various parts of the country. Diversity is strength.

doctorSHARE, which is active in social activities in the form of health services, does not necessarily close the door to those other than medical personnel. One of them is Stella Rissa. Her name has traveled the world in various prestigious fashion festivals. As a fashion designer, she has her own way of contributing to humanitarian missions.

Stella learned about doctorSHARE from her husband after watching Dr. Lie Dharmawan as a guest speaker in one of the private television programs. From there, she thought of using the organization as a medium of charity. As if on cue, Stella’s husband found a way to join doctorSHARE.

“It was like a match, my husband and I hadn’t had time to look for contacts, suddenly a friend invited us to donate here,” she explained.

In April 2016, Stella realized her desire to help doctorSHARE’s activities. Was it by taking medical school? Of course not. Or studying pharmaceutical and nursing sciences? Of course not either. Being her artistic self, she launched a special edition scarf. Titled “doctorSHARE x Stella Rissa”, it complements the collection of her fashion label, STELLAR.

The two versions of the shawl motif with different sizes have their own philosophies. The patterns are Stella’s hand-drawn on canvas and then digitized. The digitization process was intended to make it easier to apply the patterns to each piece of fabric used as raw material for the shawls.

For Stella, painting is just a hobby. The clothes she designs are mostly plain without patterns. However, creating motifs for her social mission presented its own challenges. She wanted the fundraising through the sale of the special edition products to be total and maximized.

“When I painted the motif for this scarf, I wanted to be able to give the best because the goal is also for donations. It took me a while to design, so I came up with two motifs and hopefully they will be valuable,” she said.

The first motif is named ‘Maluku’. The title was inspired by doctorSHARE’s story about the difficulty of reaching areas in Maluku which is an archipelago. Challenges and obstacles have also been experienced during medical services in the region. Stella painted it with round shapes scattered in the middle of a light blue pattern to represent the sea. The line strokes that divide in the middle symbolize the spirit of doctorSHARE to keep reaching every corner.

The second motif is “Heart”. With the dominant peach color tending to pinkish, Stella intends to depict the sincerity of both donors and volunteers, especially at doctorSHARE. STELLAR donates all proceeds from the sale of the shawl to doctorSHARE, especially in the construction of the third RSA Nusa Waluya II ship.

Equally aiming for a humanitarian mission, Usep and his friends prefer to open reading parks for children in their village. Three Community Reading Gardens, namely Al-Munawar, Al-Karaji, and Al-Ikhlas, have been established in Sukaharja Village, Sukamakmur District, Bogor Regency. The location must be traveled about 3 – 4 hours from the city center of Bogor.

Usep and his friends work as teachers. Taman Bacaan Masyarakat was formed to raise public awareness of the importance of reading and education. The reason is that only a handful of people in the area receive higher education. “Let alone college, even high school students are still few because the school is quite far away,” said Usep when attending doctorSHARE’s 7th anniversary at Jetski Cafe, Jakarta.

Through social media, Usep collects books from donors. He added, actually not only books are open to receive, but also anything that can support education for children. “There was also someone who donated a bicycle. We accepted it to attract children instead of hanging out uselessly,” he explained with a laugh.

Usep hopes that doctorSHARE can also accommodate collaborations to create health-themed educational programs in areas like where he lives. “We are both active in the social field, we are in education, doctorSHARE in health. Make for example counseling, who knows children are also inspired to want to be like Mr. and Mrs. Doctor,” he said.