doctorSHARE in Action to Help Earthquake Victims in Aceh 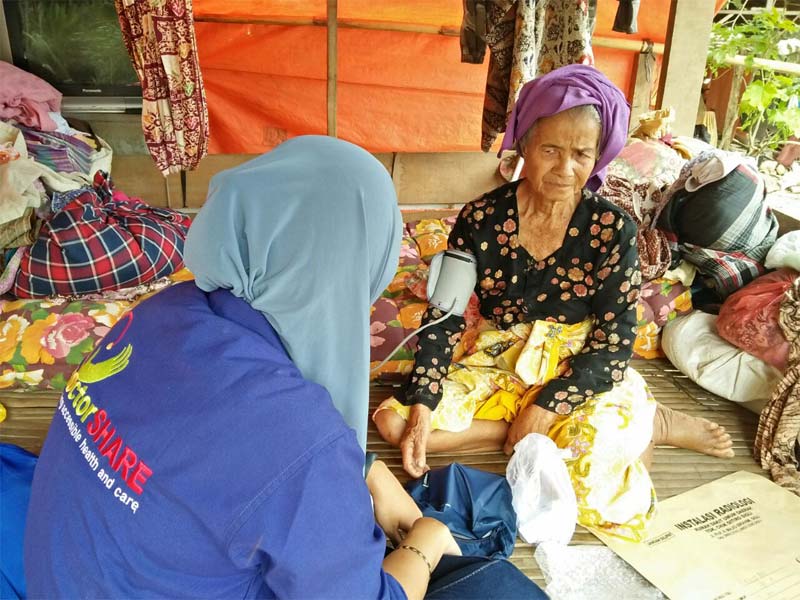 An earthquake measuring 6.4 on the Richter Scale shook the districts of Pidie Jaya, Aceh. The earthquake that occurred on Sunday morning (December 7, 2016) destroyed hundreds of homes and shops. The data from the National Disaster Management Agency (BNPB) recorded 100 people were killed and 875 people were injured in this earthquake, both minor and serious injuries.

Still quoting from BNPB’s data released, the number of refugees currently reaches 45,239 people, in which 43,613 people are in Pidie Jaya and another 1,716 in Bireuen district. The Government of Indonesia in cooperation with various institutions directly intervene to these affected areas. The evacuation shelters, food distribution, and cleaning up process to the building remains continue to this day.

“People are still living in evacuation shelters because they fear of aftershocks that are still going on,” said Siti Raziah Razali, a villager in Menasah, Pidie Jaya to doctorSHARE team.

doctorSHARE team brings a wide range of medicines and immediately move towards the evacuation posts in rural areas Iboih Blang Pidie Jaya – Aceh. At this post, doctorSHARE serves 95 patients, two minor actions and the trauma treatment for about 40 children.

Other posts that are being served by doctorSHARE located in a Ihok Sandeng village, Pidie Jaya, which has patients more than 160 people and two minor actions.

The total patients treated by doctorSHARE team in both posts reached 262 people where most types of disease are upper respiratory track infection and myalgia (muscle pain), as well as four minor actions. Tomorrow (Thursday, December 15, 2016), doctorSHARE team will move to Sarahmane village, Pidie Jaya, to give medical services.

In addition to general medication and minor action, the team also carries out trauma healing activities, especially for children.

“Children need assistance in order to keep the spirit and not being fear. In the evacuation shelters, we have activities like drawing, storytelling and singing. Children are entertained,” said dr. Herliana.

Until now, the aftershocks are still going on, although not causing serious any serious damages. Villagers and Emergency Response team continue to monitor surrounding conditions after the earthquake. From the observation of doctorSHARE, villagers’ activities have resumed normal. Villagers are back to have activities in the market, planting rice, and also clearing the building debris.

“People are still living in rumoh (traditional house) Aceh are grateful. The houses are stand still and intact. Only the furniture in the house are broken. This earthquake is a valuable lesson for us,” said Zaenal, a resident in Pasar Meureudu.