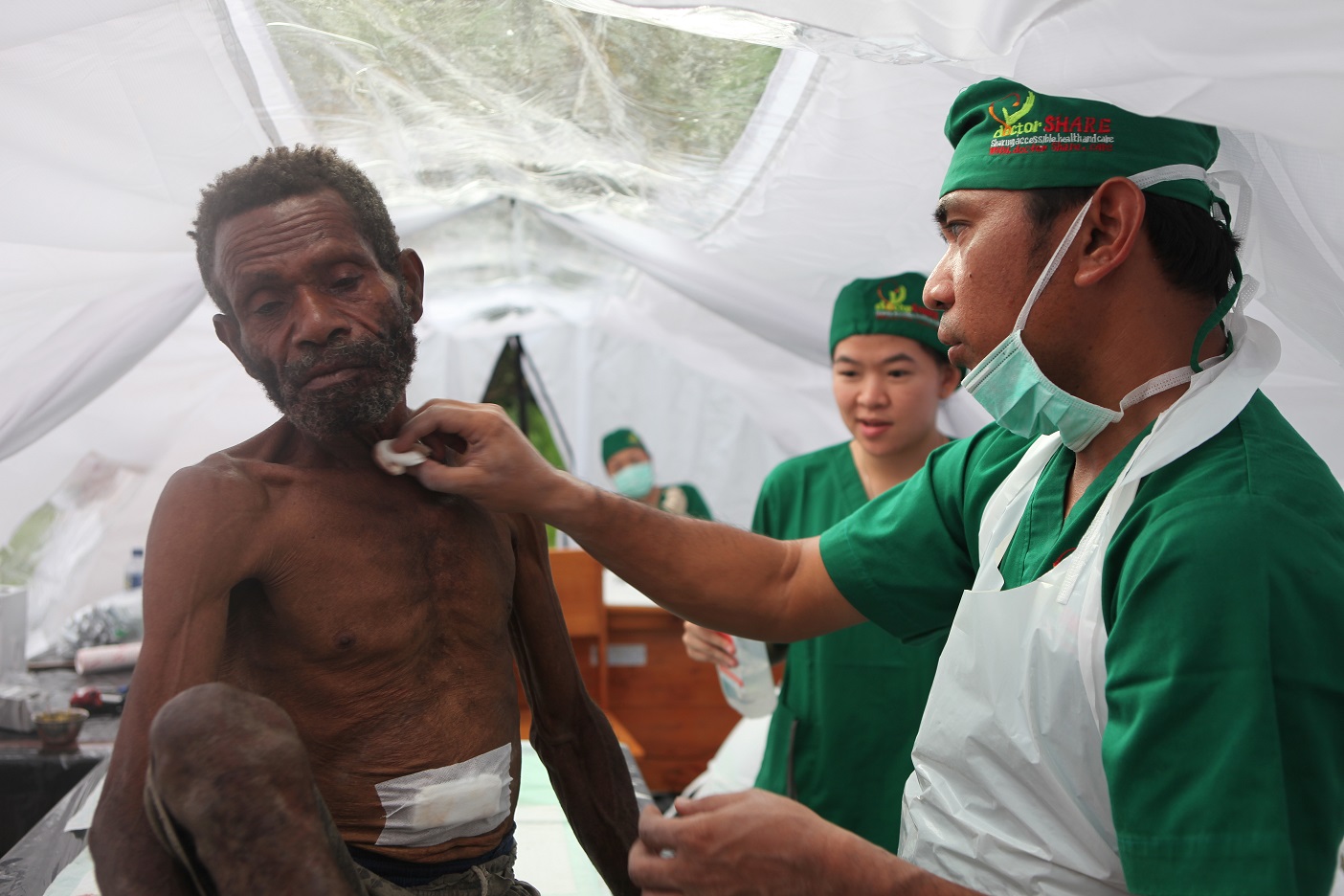 This airport feels very special compared to most other pioneer airports in Papua. An airport monitoring building and a fire engine are available. Airport and security officers also looked alert to guard the airport track.

The flight from Nabire to Sugapa takes about 45 minutes. The plane passes through a towering valley and a slightly overcast sky. The 20-passenger airplane was agile through the dark clouds.

For me and perhaps other passengers, it was enough to make my nerves tense. Our mouths prayed throughout the flight. The only entertainment is enjoying the beauty of Papua’s dense forests that resemble broccoli. And also the villages separated by mountains and jungle.

Sugapa is located on top of the mountains of Papua. The cold air immediately pinches the skin when arriving here. The green hills around the airport are a feast for the eyes. We immediately took a motorcycle taxi and left the airport. Heavy rain immediately poured down on Sugapa.

The lodging house we stayed in is known as the base camp for climbing Cartensz, one of the highest mountains in Indonesia that is covered with snow all year round. Apart from Sugapa, another point of ascent to Cartensz is Timika.

“The walk to Cartenz can take about fourteen days,” said Rini from the Somatua Foundation who accompanied the medical service. Unfortunately, the top of Cartensz is not visible from here.

That night, we immediately lay down. As the night wore on, the air grew colder. Luckily, a dinner of salted fish and liwet rice was enough to fill our stomachs. We slept very well. Jackets, sleeping bags and socks were enough to protect us from the cold.

“The water in the bathroom is enough to wash my eyes and brush my teeth,” I said in the morning. Apparently, the others agreed. It’s not that the water in the bathtub is empty but that it’s cold like ice water from a refrigerator.

In the morning, fifteen motorcycle taxi units were already on standby in front of the inn. Boxes of medicines and logistics for medical services were strapped to the back seat of the motorcycle. Most of them are migrants from Sulawesi and Java who migrated to Sugapa and chose to become motorcycle taxi drivers.

Why is it expensive? It’s also Papua.

However, the risk of becoming a motorcycle taxi driver in Papua is also not easy. And it can make the motorcycle taxi driver destitute. First, they must be prepared with all the terrain and road conditions in the mountains of Papua which are still chaotic. Second, if an accident occurs, they must be prepared to be sued for tens of millions of rupiah!

Life in the mountains of Papua does have its own mathematical formula. Almost 90 percent of daily needs are imported from the city. This transportation cost is why all the necessities of life in Papua are so expensive. Goods such as eggs, fish, chicken, cement, and clothes are transported by plane.

Don’t be surprised if you eat a bowl of meatballs for 60,000 rupiah! Glek.

The taste is horrible. The motorbike sped through the slippery road and steep climbs. Thirty minutes later, we finally arrive in Hitadipa. An exotic little village nestled at the foot of a valley. The swift flow of the Iyabu River is the district’s mascot. The wooden bridge “rocking dangdut” is the only connection to this village.

Hitadipa is considered an independent district. There is a health center, elementary and junior high schools, a church, and a solar power unit. Electricity flows from 6pm to 10pm. The television is on. People can read books. Hitadipa even has its own airplane track!

In the field, doctorSHARE embraces local midwives, nurses or health workers – and shares their experiences on medical procedures. They are at the forefront of boosting the health quality of local residents. “Their work is not easy in the midst of limitations,” said Dr. Riny.

Providing medical services in remote areas is not easy. Often the existing medical personnel must be able to do many things. In fact, they have limitations both in terms of experience and individual abilities.

“However, now there is a policy that they (midwives, nurses, medical personnel) can work like doctors. Of course, according to their knowledge and experience,” said Dr. Lie Dharmawan. The term is barefoot doctor.

On the first day, residents came to the health center. docterSHARE immediately provided medical services. One by one, residents were checked for health conditions. The team listed the residents who were ready for surgery. Not a few residents were seen to have lumps on their bodies.

On the second day, the operation tent was set up. Tables served as pedestals instead of beds. Medicines and surgical equipment were prepared. Doctors immediately got to work to complete the surgeries.

“The residents have hernias due to heavy work. Many feel pain in their backs and legs. Including breathing problems,” said Dr. Lie Dharmawan.

On the third day, we conducted healthy living learning activities at the school. One of them was teaching children the habit of brushing their teeth. Dozens of elementary to junior high school children lined up in the field. They looked happy and excited to learn how to brush their teeth.

doctorSHARE Flying Doctors has been running for two years in 7 remote areas in the mountains of Papua. Efforts to improve the quality of health of Papuans are not only limited to the medical aspect but also related to other aspects such as social, cultural, and even political.

Building quality of life in Papua requires cooperation and commitment with various parties. “That way, the human quality will be better,” said Dr. Lie Dharmawan.