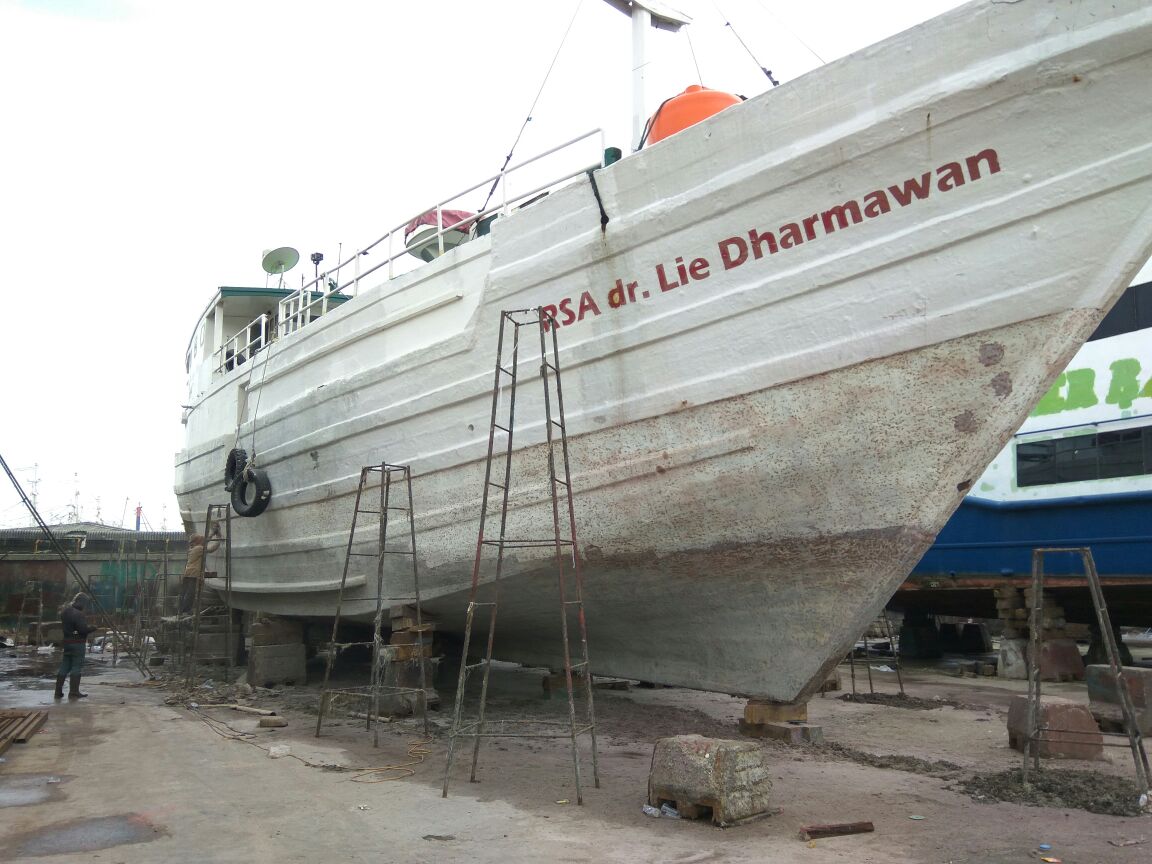 Throughout 2016, Dr. Lie Dharmawan Floating Hospital (RSA) has traveled a very long journey. From the west to the east, the sea terrain that was traveled could not be said to be easy. Wind, ripples, waves, tides, ebbs, rain, heat, and so on have colored the voyage of medical services in the waters of the Indonesian archipelago.

To keep the ship in top condition while improving service performance this year, the team also conducted docking and interior improvements to RSA Dr. Lie Dharmawan.

Ship docking is the process of moving a ship from the sea to a dock with the support of a number of facilities. In order for the docking to run smoothly, the team must make careful preparations considering the different specifications of the ship.

The docking process of RSA Dr. Lie Dharmawan this time was assisted by PT Proskuneo Kadarusman, a company that owns one of the shipyards in Muara Baru, North Jakarta. The docking of the RSA was handled by experts in their respective fields.

During the voyage, the bottom of RSA Dr. Lie Dharmawan often experienced collisions or ran aground. Many barnacles were also left behind. Barnacles (Chthamalus stellatus) are shelled marine animals measuring 2.5 – 75 centimeters that usually live in shallow waters or tidal areas. Small barnacles float in the water but when they grow up, they will attach to other marine animals and even to solid objects in the water, including the bottom of a ship.

Once attached, barnacles will spend a lifetime in the same place. That is why the bottom of the ship must first be ground down until it is completely clean from barnacles. After that, the bottom of the ship is then recoated with fiber to provide protection so that the strength of the wood is increased. The base material of RSA is ironwood, the strongest type of wood in the world.

After the process that took place on the shipyard went well and smoothly, the physical appearance of the RSA Dr. Lie Dharmawan was looking good again. The RSA then returned to Kali Adem Harbor, North Jakarta, to continue the interior renovation process.

The interior renovations included adding a room for patients who had been operated on to regain consciousness (resuscitation room), adding a protective layer to the walls and floors of the RSA, repairing the doors located on the hull of the RSA, and renovating the crew rooms. We also ensure that key safety equipment on board such as life vests, fire extinguishers, and lifeboats are in top condition.

These efforts are made to improve the performance of the Floating Hospital so that health services for remote communities can be optimized. We also remain committed to developing various innovations. Clearly, all of this hard work is inseparable from the support of doctorSHARE volunteers and donors.

Thank you for your trust. Let’s continue to work together to serve our brothers and sisters in the remote islands of the country who have been far from the attention of all of us.