Experiences at doctorSHARE in Jakarta and Beyond: Volunteering for 4 Weeks (1st-26th of August 2016) 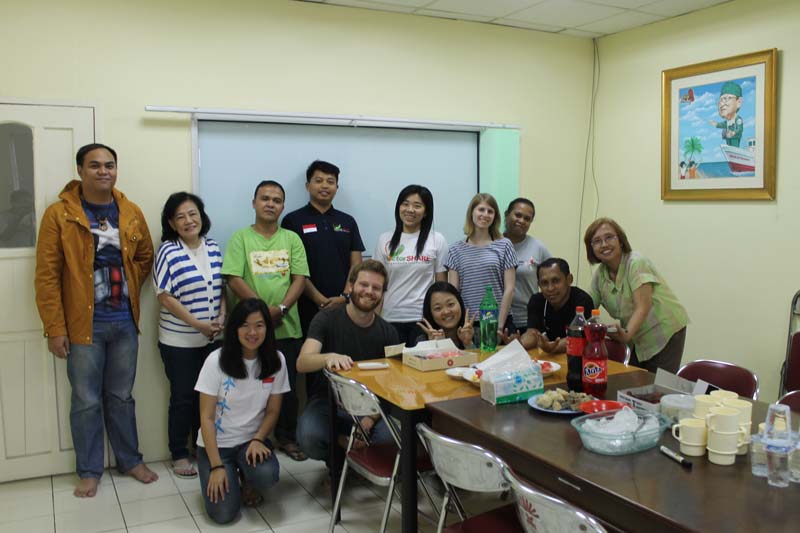 Share
Firstly, we’d like to introduce ourselves: we are Jendrik and Laura, two students from Germany who decided in early 2016 to participate in a voluntary project in the next summer holidays. The question was only how and where? It was left unanswered until a fellow student of Jendrik showed him two videos of the activities of doctorSHARE on YouTube.
Unfortunately we are no medical students but an engineer and a designer. However, it turned out that this was no problem since there was other work to do then medical services. So, after the expected bureaucratic procedure, the journey to Jakarta could be planned.
When we arrived we were picked up and welcomed by dr. Lie Dharmawan, the founder of doctorSHARE and two other members of the “doctorSHARE Family”. We found out quickly that the term “family” is very appropriate to describe the organization with dr. Lie being the father or “papi”. We had some time to relax at papi’s house before going to work at the office of doctorSHARE in Jakarta the next day.
The organization welcomed us with open arms from the first day. Though not everybody spoke English and our Bahasa Indonesia was very, very limited, we were able to communicate.
In order to get an overview of the activities of the organization, all the different members told us about their field of work. All of doctorSHARE’s activities are conducted to fulfill the vision of dr. Lie: to bring medical services to remote areas of the Indonesian archipelago and help the people who are trapped in crisis. This is conducted by the organization in innovative ways like with planes (“Flying Doctors”) or ships (“Floating Hospitals”). However, the idea is not only to help people but also to educate them to enable them to help themselves.
We were proud to be able to support the work of doctorSHARE, even if our contribution was only made by office work. We were also happy to work together with so many nice people. Beyond working with us, the members of the doctorSHARE family helped us with everything and invited us to numerous activities like learning Bahasa Indonesia, cooking, karaoke, the movies, and, of course, eating out, and just having a good time together.
We were also able to explore Indonesia a bit further: we travelled to Yogyakarta in southern Java, Timor, and Bali. It is to say that Indonesia is a really diversified country with many different people distributed over thousands of islands speaking many different languages.
However, we were welcomed in the same nice and open way in every place of the archipelago we visited. Greater than the diversity of people in Indonesia is only the diversity of food. There are so many dishes that it is impossible to eat every dish in a month (or even in a year) even when eating something different for every meal.
All in all, this one month was a fantastic experience for us. We were meeting so many nice people and new friends and could get an insight into an organization which makes an important contribution to really to improve the lives of the people of Indonesia. We will definitely support doctorSHARE, its activities, and its vision in the future and encourage everyone we know to do so too. Also we’ll surely return to Indonesia since it is a beautiful country with good-hearted people.
* * *
Jendrik Silomon is an engineer, researcher, and traveler from Germany
Laura Evers is a student, graphic artist and interaction designer from Germany