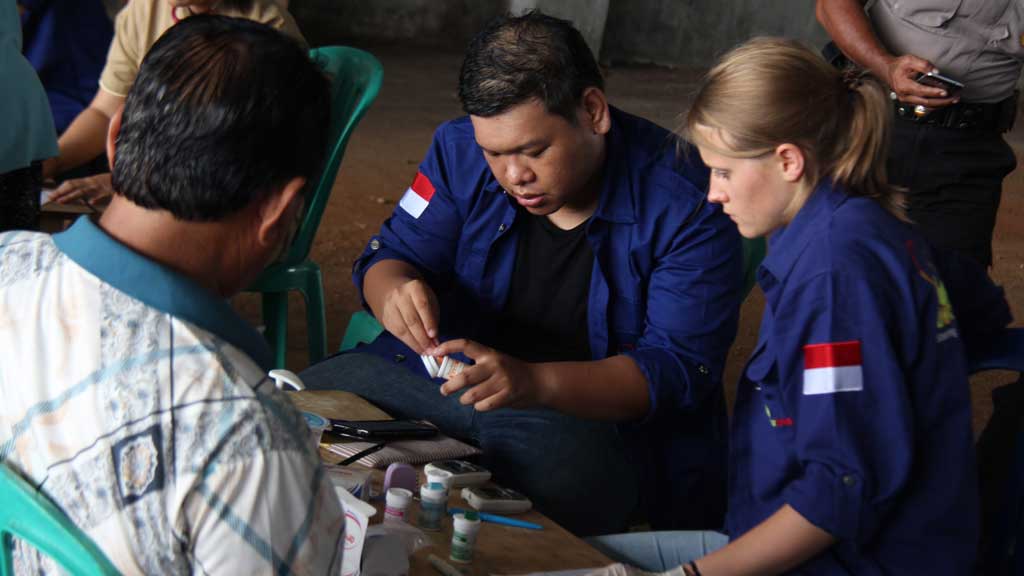 The doctorSHARE volunteer team together with Rumah Sakit Apung (RSA) dr. Lie Dharmawan served the people of Indonesia on August 5 – 11, 2018. This time the medical service was carried out in Batui and South Batui Districts, Banggai Regency, Central Sulawesi. According to data from Law No. 51/1999, Banggai Regency has an area of 9,672 km2 or about 14.22% of the area of Central Sulawesi Province.

Consisting of 15 medical volunteers and five non-medical volunteers, the doctorSHARE team started their journey from Jakarta on Sunday (5/8) morning. Upon arrival in Makassar, the team immediately continued their journey to the capital of Banggai Regency, Luwuk. Upon arrival at Syukuran Aminuddin Amir Airport, Luwuk, the team continued the road trip to Batui District with a travel time of almost three hours.

The team carried out Balai Pengobatan (BP) and initial screening of surgery patients the next day (6/8). BP and screening were carried out at the dock of PT Banggai Sentral Sulawesi at 07.00 WITA until 13.00 WITA. Based on the report of BP Coordinator, Benny Wijaya, S.Farm., Apt. there were 171 patients who attended to check their health condition.

doctorSHARE also sent a team to come to conduct BP in the settlement of one of the alienated tribes in Banggai, Kahumamahon Tribe in Tombiyobong Hamlet, Maleo Jaya Village, South Batui District on the same day. The team traveled about two hours by road from Batui Sub-district to arrive at the Kahumamahon Tribe settlement. A total of 42 people from various age categories came for treatment.

Another medical center was held in the Delta Subur Permai Plantation area on Friday (9/8). The team deployed six volunteers because some volunteers were carrying out major and minor operations. In this BP, there were 110 patients who came for treatment and health consultations. The total number of BP patients from these three places is 323 patients.

On August 7-9, 2018, medical services were focused at RSA Dr. Lie Dharmawan, which was docked at the dock owned by PT Banggai Sentral Sulawesi. For three days, the activities carried out were major surgery and minor surgery at RSA dr. Lie Dharmawan. Patients who had gone through the screening process were recorded and scheduled for surgery. Patients were not limited to Batui and Batui Selatan sub-districts, but also from other sub-districts in Banggai Regency.

Major Surgery Coordinator, Dr. Jessica Soeryawinata said there were 23 patients with 25 major surgery cases. The most common cases encountered by the major surgery team were Hernia and Lipoma. According to the report of the Minor Surgery Coordinator, Dr. Andre Bayu Nugroho, the minor surgery team handled 53 patients with the most common cases being Lipoma, Atheroma Cyst, and Clavus. Major and minor surgery services in Banggai Regency exceeded the initial target number of patients.

“Major and minor surgery were targeted for 20 and 35 patients respectively. When discussed with the team, the team was able to handle more than the target because many patients came. Finally, the target patients were added during the implementation,” said the Field Coordinator of Medical Services in Banggai Regency, Panji Arief Sumirat.

The head of the Batui Subdistrict Health Center, Pinus Lakawa, also supported the BP and screening by deploying several medical staff to help run the medical services. Pinus Lakawa was pleased that the number of people seeking treatment was higher than expected.

“Especially for the activities carried out in our area, I am very grateful and thankful for helping the people in Batui District. Especially carrying out surgeries and holding general medical treatments, we are very grateful,” said Pinus Lakawa.

The community also felt helped by the medical services in Banggai Regency. One of the patients, Hasrun, felt greatly helped by the BP and surgery services. According to him, health check-ups and surgeries can be done at local health facilities, but residents often object to the costs that must be incurred.