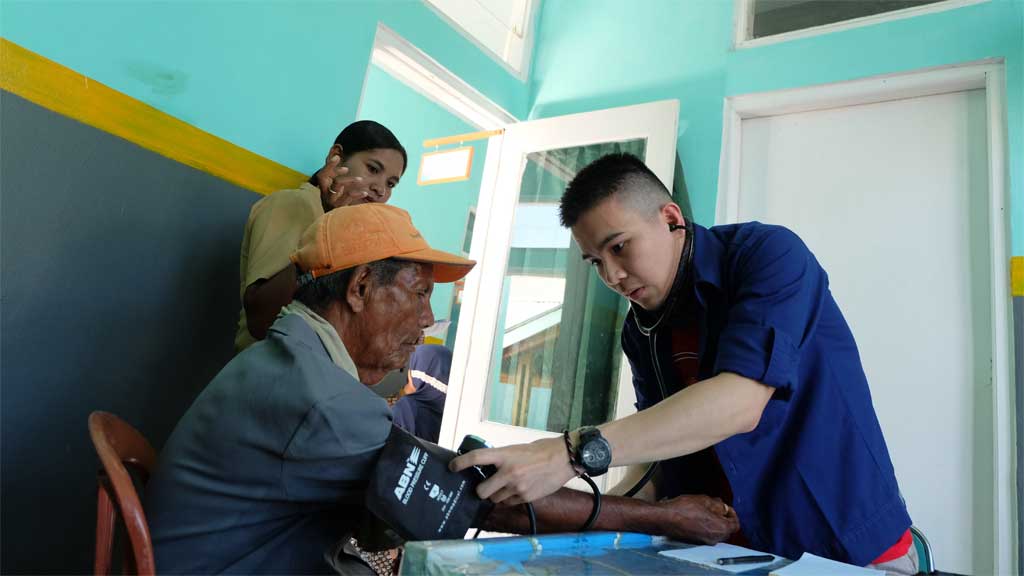 The doctorSHARE volunteer team together with Rumah Sakit Apung (RSA) dr. Lie Dharmawan served the people of Indonesia on April 22 – 29, 2019. This time the medical service was carried out in Balauring and Wairiang Sub-districts, Lembata Regency, East Nusa Tenggara. According to data, Lembata Regency has an area of 1,266.40 km2 and the capital city is Lewoleba.
Consisting of 21 medical volunteers and three non-medical volunteers, the doctorSHARE team started their journey from Jakarta to Lembata on Monday (22/4) morning. Upon arrival in Kupang, the team immediately continued their journey to Lewoleba. Upon arrival at Wunopito Airport, Lewoleba, the team continued the road trip to Balauring Harbor in Omesuri Subdistrict with almost three hours of travel time.

The team carried out the Medical Center (BP) and initial examination (screening) of surgery patients on the next day (23/4). BP and screening were carried out at the Balauring Health Center and Wairiang Health Center by dividing into two teams. Based on the report of the BP Coordinator, Dr. Grandy Ciputra, there were 318 patients who came to check their health conditions at the two Puskesmas.

On April 24-26, 2019, medical services were focused at RSA Dr. Lie Dharmawan, which was docked at Balauring Harbor. For three days, activities carried out were major surgery, minor surgery, gynecological examination, and dental examination. The Balauring Community Health Center was also used to serve patients for gynecological and dental examinations.
Patients who had gone through the screening process were recorded and then scheduled for surgery. Patients were not limited to those from Omesuri and Buyasuri sub-districts, but also from Otadei sub-district for Female Operation Method (MOW) or female sterilization.

Major Surgery Coordinator, Dr. Jessica Soeryawinata, said there were a total of 32 patients with 7 major surgery cases. The most common cases encountered by the major surgery team were Hernia, Tumor Excision, and MOW. The Minor Surgery Coordinator, Dr. Alfando David Kaligis said there were 74 minor surgery patients with the most common cases being Lipoma, Atheroma Cyst, and Ganglion. Major and minor surgical services in Lembata Regency exceeded the initial target number of patients.

Major and minor surgery services were targeted for 15 and 45 patients respectively. During the team discussion, the team was able to handle more than the target because of the large number of patients who came. Finally, the patient target was increased during the implementation. The increase in target patients was not only from patients with major and minor surgical cases.
The presence of an obstetrician (Obgyn) was widely used by patients for sterilization. The service of gynecological examination through ultrasound is eagerly awaited by pregnant women. In addition, mothers who wanted sterilization also came to RSA for action. Five babies were successfully delivered by cesarean section (Sectio Caesaria) at the RSA due to the urgent nature of the birth.