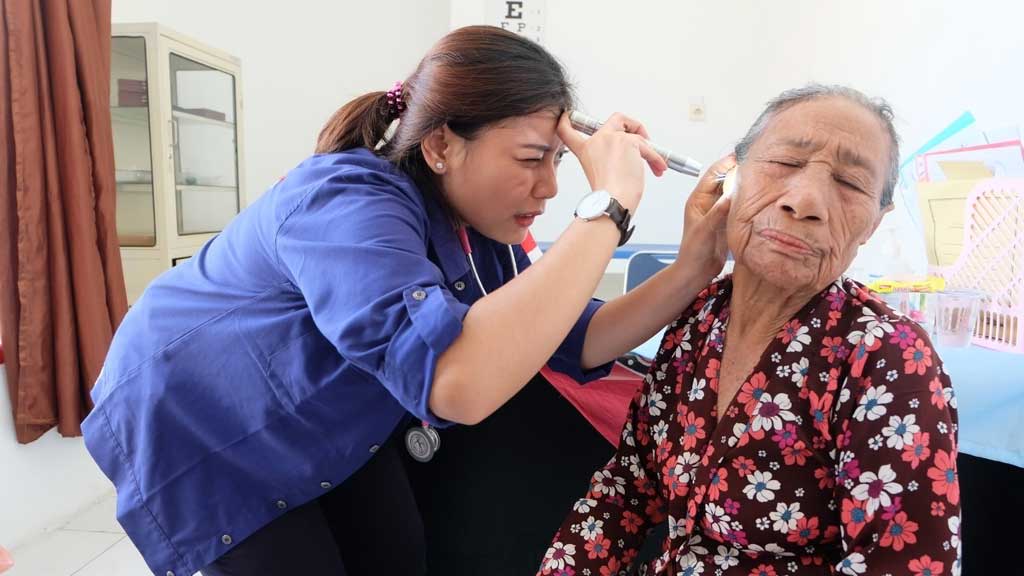 The doctorSHARE volunteer team consisting of 21 medical volunteers and 5 non-medical volunteers provided medical services in Air Buaya District, Buru Regency, Maluku on August 12-19, 2019. The team flew from Halim Perdanakusuma Airport Jakarta to Ambon City, before continuing their journey to Namlea which is the capital of Buru Regency.
The journey from Ambon to Namlea took approximately seven hours by fast boat. High waves at the beginning of the journey shook the ship. The team finally arrived safely at the Namlea Pier and immediately continued the three-hour road trip to Air Buaya Sub-district, one of the ten sub-districts on Buru Island.

At the Air Buaya sub-district office, the arrival of the doctorSHARE team was welcomed by the head of Air Buaya sub-district, Karim Gailea. In his speech, Karim expressed his gratitude for the presence of the doctorSHARE team, as well as revealing the condition of the community who are not fully aware of the importance of health. “The education level of the people here is still low. The way they manage their bodies to stay healthy is not as optimal as the city people,” said Karim.

In order to improve the knowledge and skills of the midwives of Puskesmas Air Buaya, doctorSHARE Medical Volunteer, dr. Nungky Nugroho Wibisono, Sp.OG provided material on how to handle bleeding in mothers giving birth. This skill is very necessary considering the frequent cases of postpartum hemorrhage which often leads to death.

Two doctorSHARE dentist volunteers, drg. Erna Ovtaviana and drg. Agustina Halim also provided counseling on how to brush teeth interactively using props for about 50 students of kindergarten and elementary school in Air Buaya. The team also distributed toothbrushes and toothpaste in the hope that the students can routinely brush their teeth properly in their daily lives.

Flag Ceremony at RSA
To commemorate the 74th anniversary of the independence of the Republic of Indonesia, the doctorSHARE volunteer team and the RSA crew held a flag ceremony on the deck of RSA dr. Lie Dharmawan. The ceremony lasted solemnly for 20 minutes, including the reading of the Proclamation text and Pancasila, followed by the raising of the red and white accompanied by the song Indonesia Raya.

doctorSHARE medical volunteer, dr. Eka Ayu Larasati, acted as the ceremony commander. “Commemorating the 74th Independence Day of the Republic of Indonesia, we hope that this country is truly free from all kinds of diseases and suffering. What we are doing on Buru Island is one of the real contributions in realizing this,” said dr. Eka.
The Coordinator of Medical Services on Buru Island, Dr. Ivan Reynaldo, appreciated the performance of the volunteer team during the medical services. Thanks to the support of the volunteers and RSA crew, the medical services on Buru Island ran smoothly.

“I am satisfied with the medical service activities on Buru Island, despite all the limitations. I am proud of all the volunteers who are very solid and always eager to serve. I am grateful for the success of the cleft lip surgery with excellent results, as well as the flag ceremony on the Indonesian Independence Day on the boat,” said Dr. Reynaldo.