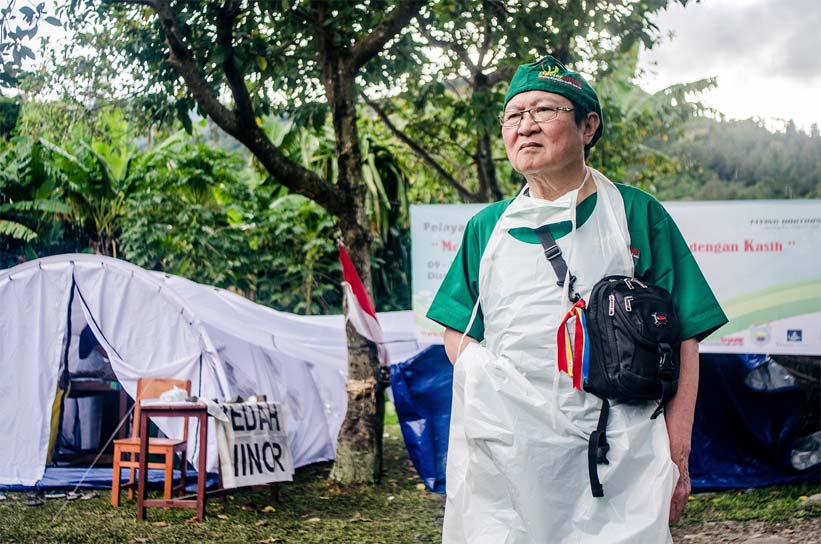 The facts that I have mentioned in the previous section cause the burden borne by the government to become heavier. This is the double burden that the government has to bear.

On the one hand, infectious diseases such as tuberculosis, leprosy, and malnutrition (both acute and chronic) are still rampant, especially in areas that lack infrastructure. On the other hand, we also face diseases caused by economic growth, metropolitan lifestyles, and increased life expectancy in urban areas such as obesity, diabetes mellitus, cardiovascular diseases, malignancies, and so on.

Inequalities in development, both physical and human, affect the pattern of disease in a region and the Human Development Index (HDI) in that region.

This presentation leads us to reflect on whether the existing health workers (especially doctors) are sufficient to welcome the demographic bonus era that Indonesia will experience in a short time?

If we are to be honest, the answer is far from the truth. The roadmap presented by WHO seems difficult to use as a standard guideline to improve the welfare of our society. The ratio between the number of doctors and the population cannot be used as the only benchmark to conclude that the number of doctors is adequate.

In developed countries, a doctor serves 200 people while in Indonesia, a doctor must serve 2,500 people. This WHO-style ratio is irrelevant. Perhaps on December 31, 2013, we could still accept this ratio. But since January 1, 2014, when BPJS came into effect nationwide, the figures for the need for doctors must be reviewed.

Before the implementation of BPJS (Social Security Organizing Agency), how many Indonesians could afford to see a doctor? To the point that there is a pameo that says that in Indonesia, “poor people are forbidden to get sick.”

There is no exact formula to measure the need for doctors after BPJS. Before BPJS, let’s assume that 20% of Indonesians could afford to see a doctor. This means that there are 50 million out of 250 million people who are potential patients and need a doctor’s help.
Post BPJS, all Indonesians are entitled to the same medical services across the archipelago. The number of potential patients has increased dramatically from 50 million people to 250 million people. This is evident from the surge in the number of patients coming for treatment at Puskesmas and Regional General Hospitals (RSUD).

Although the DKI Jakarta Regional Government has increased the capacity of the RSUD and many Puskesmas have been upgraded to become Inpatient Puskesmas, for example, the tsunami of patients who need help is still not resolved. In the regions, the situation is more depressing. Instead of a steady supply of new doctors, those who have already served 1 – 2 years are leaving the periphery for more promising areas.

Although there is a Presidential Decree (Keppres) stipulating that every newly graduated specialist doctor must serve in the region for a year, it cannot be the final solution. The number of doctors, including specialists, is far from sufficient.

Based on the developments that have occurred – especially after the implementation of BPJS, I see that Indonesia can no longer use the WHO formula (1 doctor serving 2000 people in developing countries) as an absolute benchmark. The character of Indonesia and the problems it faces are unique and different from other countries.
First, our country consists of 17,500 islands and almost two-thirds of it is sea. Therefore, we should be able to utilize the sea optimally, instead of considering it as an obstacle.
Second, the distribution of Indonesia’s population is uneven. For example, the number of people living in Central Jakarta reaches 20,000 people per square kilometer. Compare this with the population in the interior of Papua, such as Mappi District, where the population is only 2 – 4 people per square kilometer. Not to mention the unequal level of welfare between west and east.

We also need to remember that the most important point that our country is doing is implementing the demands of the Constitution (UUD) Article 28 Letter H which says that “every citizen has the right to a decent life and health”.

Lately, we have also read newspaper reports that the establishment of medical schools will be moratoriumed on the grounds that:1 The number of our doctors is sufficient2 The quality of doctors graduating from our Faculty of Medicine is low.

In terms of this moratorium, I have a different opinion. From talking to a colleague in Germany for about two weeks, the Germans think that their 15,000 new graduate doctors are not enough for their 83 million population. I don’t want to get too much into the truth of that. But the fact is, to this day Germany still imports doctors from abroad.

The national output of our Faculty of Medicine is approximately 7,000 – 8,000 new doctors per year. This means that Indonesia is required to produce more doctors, especially in sparsely populated areas such as remote islands in forests and mountains. As mandated by the Constitution, Indonesia must actively provide services to all its citizens, in accordance with their constitutional rights.
To overcome this dilemma, we at doctorSHARE (Yayasan Dokter Peduli) are grateful to have developed a “pick up the ball” system by creating Floating Hospitals that have proven effective in helping the government alleviate the need for medical services in remote areas, especially in areas where the population density is still very low.

Currently, there are already two Floating Hospitals sailing throughout the archipelago, namely RSA Dr. Lie Dharmawan and RSA Nusa Waluya I. We are now preparing the third RSA, RSA Nusa Waluya II, which is currently under construction and is expected to be ready this year to carry out its function of providing services to those in need.